The international Covid-19 or coronavirus pandemic could provide society with opportunities to adapt for the better in the long term. Over the last few months there have been improvements in the air quality with fewer fossil fuels being used. As a result, there have been reductions in the carbon dioxide emissions. There is now progress to re-define the future after the lock down restrictions are removed. Movements such as C40 sees many global cities taking bold climate action that will enable a more sustainable future that will benefit many.

Since the widespread international Covid-19 or coronavirus pandemic lock down of early 2020, many have benefited from improved air quality by the fact many fewer hydrocarbons in the form of fossil fuels were being burnt. Reduced usage has led to a massive drop in emission levels. The virus emergency has shown us what can be done in terms of transforming high pollution levels. It has given many an opportunity to re-think what we do and why are we doing it. We are already experiencing a climate emergency and massive action is needed to reduce global warming. Improved air quality has produced record solar photovoltaic (PV) output too. Solar PV electricity production records have been exceeded partially as skies have cleared. See this National Grid explanation, which is mainly to do with increased UK sunshine in April. The UK has now had a record long time without burning any coal to produce electricity too (over 1000 hours or 41 days at the time of writing this post).

The UK is aiming to have zero carbon emissions in its electricity production systems by 2025 as outlined by the National Grid. Innovative systems, products and services are being developed to ensure that the electricity network is ready to handle 100% zero carbon power by 2025. Integration of new technologies and managing renewable systems together with increased demand management, smart technologies that will manage and control the network in real-time. Barriers to using renewable electricity resources are coming down as the national power network evolves to manage the nature of the power that is now being generated.

In China, the lock down improved the heavily polluted skies significantly. Since the lock down has been rolled back the pollution levels are already starting to return. Some emission maps clearly illustrate this change as a direct result of the Covid-19 lock down and subsequent suspension of industrial activity.

This NASA image shows the reduction in airborne nitrogen dioxide across China. 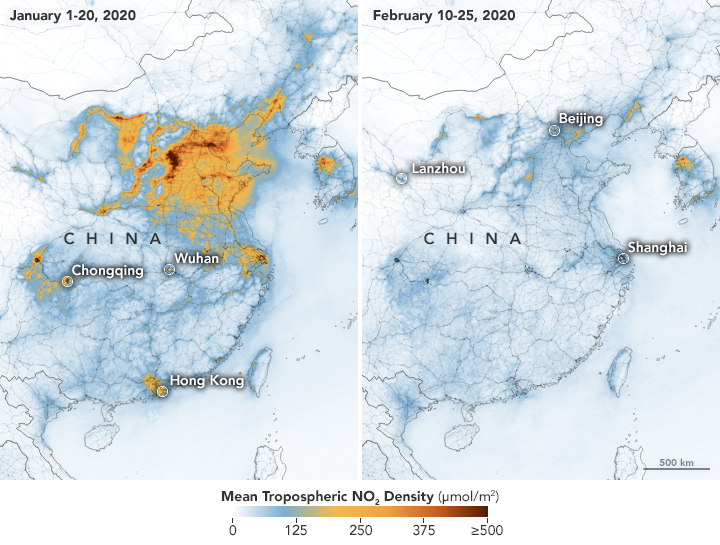 Nitrogen dioxide is a noxious gas emitted by motor vehicles, power plants and industrial facilities. The reason for the fall was the stop in activity across China due to the lock down. The measurements were taken from the European Space Agency’s Sentinel-5 satellite which has a Tropospheric Monitoring Instrument on board. Further details are on the NASA Earth Observatory web site.

There were other examples where the air quality improved too, mainly across urban areas and the north of Italy was another place that showed a similar change in atmospheric pollution levels.

The science journal Nature reported reduced carbon dioxide emissions. The effect of the lock down confinement was to decrease daily global carbon dioxide (CO2) emissions by 17% (–11 to –25%) by 7 April 2020, relative to the mean level of emissions in 2019. Currently we emit around a daily total of 100 MtCO2 d−1 so the reduction was in the region of –17 (–11 to –25) MtCO2 d−1. Values varied by country and thus had a geographical pattern where there were larger or smaller declines.

Several global leaders have highlighted the need to change direction and not to return to the old ways of economic growth. The Japanese environment minister Shinjiro Koizumi, warned that the Paris climate accord could face death if steps to fight global warming were ignored in favour of the economic recovery from the coronavirus pandemic.

There is a new movement in many world cities known as the C40 cities that are intending to take “bold climate action, leading the way towards a healthier and more sustainable future”. Under the slogan “Now Is The Time To Act”, the cities are demonstrating that decisions can be made now to deliver of the Paris Climate change agreement.

Deadline 2020 aims to keep temperature increases from climate change below 2 Celsius and to limit the temperature increase to 1.5 Celsius. Cities can deliver up to 40% of savings needed for a 1.5C world. Average per capita emissions across C40 cities need to decrease by around 42% from today’s level. It aims to deliver actions on the ground.

The statement of principles has so far been signed by mayors representing 33 world cities from Los Angeles to Lisbon, São Paulo to Seoul, Melbourne to Mexico City.

A global recession forecast for this year, as countries were forced into lock down to contain the spread of the coronavirus, have curtailed business activity with a major blow to jobs and incomes. Economic recovery should consider the environment and re-focus on new growth areas such as sustainable jobs that benefit humanity and move us away from current high emission scenarios.

Those unfortunate enough to have lost jobs should be re-skilled or trained into new sustainable work that will bring future growth that does not include pollution and further carbon dioxide being emitted. Ironically, public transport use has declined drastically (for example railway passengers were typically 90%+ down on typical passenger numbers in London, UK). Here is an opportunity not to be missed.