The Earth’s magnetic field is shifting and it is now possible to monitor that shift from satellites. Renewable power storage is gaining momentum which enables a move away from fossil fuels. New energy options look at ways to store and work with renewable energy production. How to harness the falling cost of this power source will be a key innovation for the acceleration in the decarbonisation of the energy sector. Post Covid19 there may be opportunities to rebuild new jobs in this sector that is likely to grow rapidly.

The Earth has seen some changes to the magnetic field over recent years. There is an uncertainty as to why it is happening but it will have consequences for satellite and spacecraft for example. 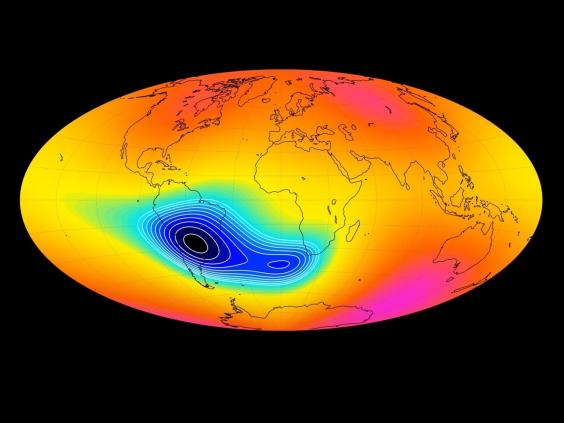 The Earth’s magnetic field is weakening between Africa and South America in an area known as the “South Atlantic Anomaly”. This area has grown considerably in recent years. The European Space Agency’s (ESA) Swarm constellation of satellites have provided data showing the area of the anomaly dropped in strength by more than 8 per cent over 50 years from 1970 to 2020. The new eastern minimum of the area has grown in size and continues to develop rapidly.

It is not clear what processes are driving the change in the South Atlantic Anomaly, it could be that the poles are about to reverse. This is something that has happened roughly every 250,000 thousand years, although the last time a “geomagnetic reversal” took place was around 780,000 years ago.

Such an event could have immense impacts. The Earth’s magnetic field protects the planet from solar winds and harmful cosmic radiation. There could be implications for the telecommunication and satellite systems too. They rely on the magnetic field to operate. Computers, power grids and mobile phones could be affected by magnetic changes. The area of the South Atlantic Anomaly can cause technical issues for low-orbit satellites and space craft.

A 2018 article in the Proceedings of the National Academy of Sciences found that despite the weakening field, the “Earth’s magnetic field is probably not reversing”. The process is not instantaneous and could take tens of thousands of years. The article notes that the geomagnetic field has been decaying at a rate of ∼5% per century from at least 1840. Indirect observations have indicated a decay since 1600 or even earlier.

There are several developments in ways of storing and provisioning energy needs. All offer a greatly reduced climate impact to existing fossil fuel based systems.

The International Energy Agency or IEA published a June 2019 technology report on the future role of hydrogen in the energy mix. Hydrogen and energy have a long shared history for over 200 years. Hydrogen is light, easily stored, energy-dense, and importantly produces no direct emissions of pollutants or greenhouse gases. In order for hydrogen to make a significant contribution to clean energy transitions, it needs to be adopted more widely. This includes sectors where it is almost absent: for example transport, buildings and power generation. That is gradually being addressed as the examples below demonstrate. There is a risk that without government foresight, planning and support that hydrogen electrolysis momentum does not grow as much as it should. See this IEA article: The impact of the Covid-19 crisis on clean energy progress.

In Japan there is a pilot hydrogen plant run by Advanced Hydrogen Energy Chain Association For Technology Development (AHEAD). The project will continue through November this year. The Kawasaki plant can generate 80 megawatts of electricity using Hydrogen that, when burnt, will produce only water vapour.

Ultimately it aims to transport 350,000 tonnes of hydrogen a year to power a 1 gigawatt hydrogen-fired power plant in 2030. In the future hydrogen should be extracted from renewable energy and a strong supply chain established. AHEAD are able to transport hydrogen at a normal temperature and pressure, and to use existing facilities used for oil. It is described as the “Organic Chemical Hydride Method”.

The AHEAD project hopes to confirm how effective the international hydrogen supply chain transport is. It aims to establish a commercial hydrogen supply chain business in future. It is also researching various aspects of the practical application of the process. Further details are on this Popular Mechanics article which highlights the current role of the hydrocarbon industry.

Hydrogen extracted from fossil fuels typically costs between $1-$1.8/kg according to this report. Hydrogen, extracted using renewable energy known as “green hydrogen”, costs around $6/kg today. It is significantly more expensive than the fossil fuel derived alternatives. Increased demand could for green hydrogen could reduce the cost of electrolysis process where hydrogen is extracted from water. With falling renewable energy costs, green hydrogen could fall to $1.7/kg by 2050 and possibly sub-$1/kg. This price makes it competitive with natural gas. If there were higher carbon prices that would encourage the shift to hydrogen.

There would need to be some large-scale infrastructure changes to support the “hydrogen society”. Large-scale use, for example by industry or the transport sectors, would need major infrastructure investments. Power from offshore wind farms would need to be connected to an electrolyser to produce the green hydrogen. There would have to be transport to end consumers and more vehicles that use hydrogen. New fuel stations serving this hydrogen would be needed too.

A new development that aims to store power, like a conventional battery, for renewable energy power storage. A company in the UK, Highview Power, has developed a “CRYOBattery” which delivers, clean, reliable, and cost-efficient long-duration energy storage. This will be a way to facilitate a 100% renewable energy future. It uses cryogenic energy storage technology and releases zero emissions in the process. These plants can be located anywhere so there is not a geographical constraint to this technology.

The CRYOBattery can produce 20 MW/80 MWh to more than 200 MW/1.2 GWh of energy which can power up to 200,000 homes for a whole day. It uses air and costs around half of the cost of lithium-ion batteries and releases zero emissions. The cryogenic energy storage technology is based on the principle of air liquefaction. Air is stored as a liquid which provides high-density storage. When required the liquid back is converted to a gas, generating energy that powers turbines and produces electricity.

Solutions such as this provide energy when wind and solar energy is not being produced. They provide “grid-synchronous inertia” balancing electrical demand and supply which helps to avoid blackouts.

In December 2017 this blog reported on the World’s Largest Battery on the Hornsdale wind farm. The battery is set to get bigger and gain 50% more capacity. The Hornsdale Power Reserve in South Australia, built by Tesla and managed by renewable energy company Neoen, will be expanded. This 129 MWh battery with an output of up to 100 MW became the world’s largest lithium-ion storage battery, a title that it still holds two years later.

The 50MW/ 64.5MWh expansion, supported by Tesla, demonstrates the benefits that grid-scale batteries can provide to the National Electricity Market (NEM) and Australian consumers. It will provide additional power system reliability and continued cost savings to consumers. In the first year of operation consumers benefited by more than 50 million Australian dollars.

The expansion will demonstrate the potential for battery storage to provide the stabilising inertia services. These are critical to the future integration of renewable energy which produce sporadic power production. Inertia services stabilises the grid when electricity supply and demand fluctuates. It automatically and rapidly charges and discharges power thus mimicking the existing (fossil fuel) based grid behaviour.

South Australia will benefit from the continued harvesting of its world class wind and solar resources. It also helps with a target to be net 100% renewable by 2030. It will also see the South Australia State transition to become a net-exporter of cheap and clean renewable energy to the NEM. Benefits include the further drive down in electricity prices for consumers.

There are several innovations highlighted in the renewable energy sector that offer the ability to transform our power supplies such as liquid air batteries. Satellites may provide new insights to the Earth’s magnetic changes and increase our knowledge in this area.